The time of the adult theater came to a swift end as censorship laws and the rise of VHS cut into their profits. The 1980s ushered in a wave of cultural conservatism, and the convenience of watching in private rendered the picture houses obsolete. 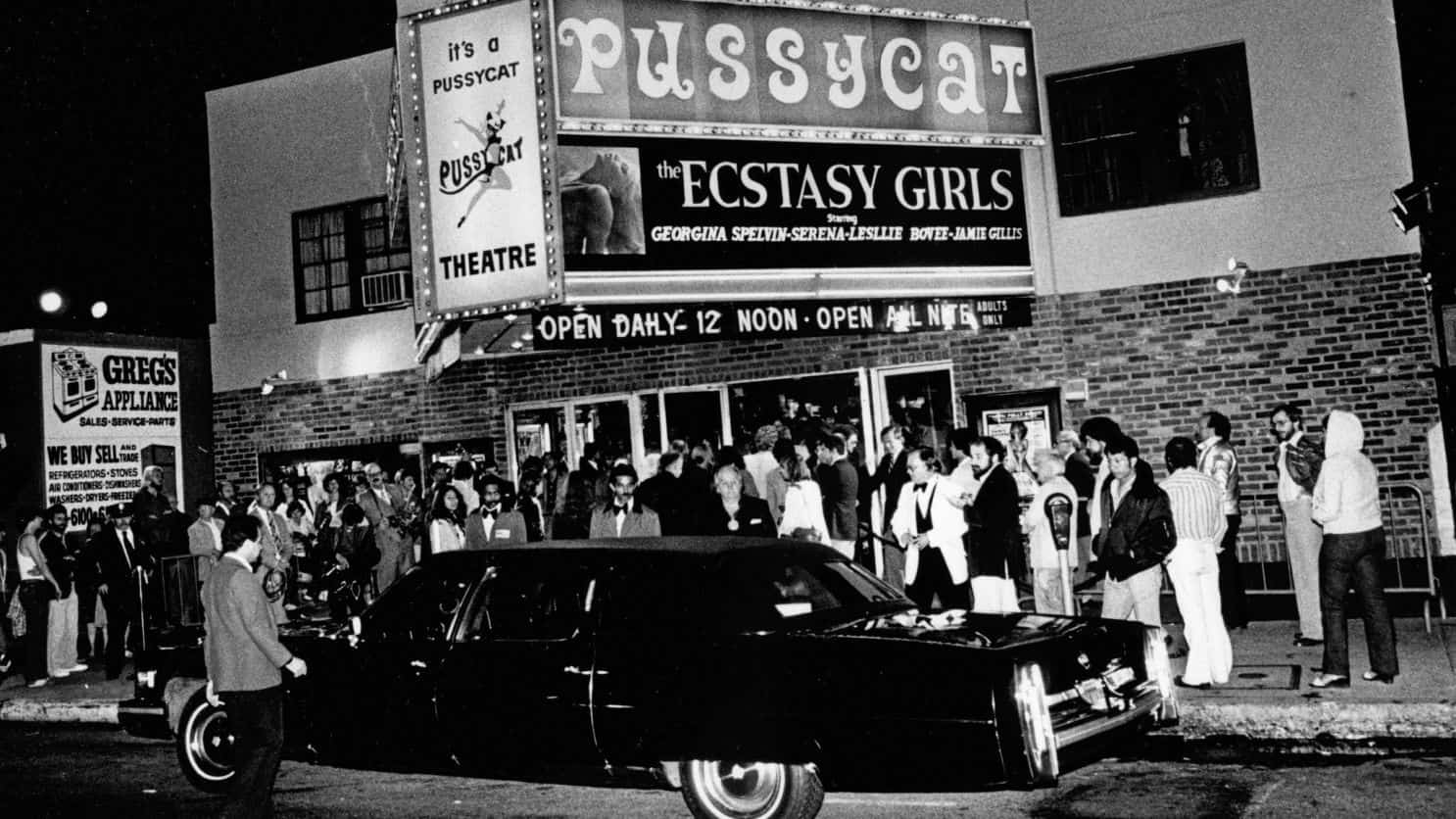 Before adult theaters were in vogue, suggestive content was limited to the margins of polite society. Amateurs shot and acted in their own films, sometimes developing the films themselves in bathtubs. Showing their handiwork was prohibited, though, and could result in prison time. The films were instead distributed by underground networks and seedy traveling salesmen. One of the few places where the footage could see the light of day was in a place where the lights shone red.

Cathouses served as the first adult theaters. Already a carnival of flesh, establishments that offered sexual services were the natural place for screening rooms where visitors could enjoy illicit viewings for an extra charge.

In 1985, a poll found that more Americans could identify Lovelace more so than the former secretary of state Henry Kissinger.

Some Adult Theaters Emerged As Safe Spaces For The LGBTQ Community

These locations became hubs of LGBTQ solidarity and activism. They were a safe place to meet because they offered a shield from judgment found in the outside world. Visitors could simply be themselves inside those walls without the risk of judgment or stigma.

‘Drive-In Dirties’ Were Some Of The Most Successful Adult Theaters

In 1966, a struggling drive-in theater in Durand, MI, decided to start showing adult films. It was an overnight sensation. People drove from all over the state to see the “Durand Dirties,” and the attention helped economically stimulate the depressed rural town. The Durand Dirties soon became a chain and spread to other rural areas that were in search of a business boost.

By the mid-’70s, there were more than 70 of these branded drive-ins throughout the country.

Zoning laws and a societal shift towards conservatism aside, VHS tapes were the chief assassin of the adult theater industry. While some patrons enjoyed seeing adult films in a public setting, there was often a lapse in the contract of what’s socially appropriate that made viewers uncomfortable. (There’s a reason why such theaters have a reputation for sticky floors and creepy dudes in trench coats.)

There was also the risk of an inopportune run-in with a neighbor or the theater just not playing a preferred kind of genre.

A Theater Owner Took His Case To The Supreme Court

After being released on bail, Wenzler began selling stills from the film at his theater’s candy counter. He was again apprehended. He appealed his case all the way to the Supreme Court in 1964. He ultimately lost the case, spent a month in jail, and was fined $525. He was apprehended several more times throughout his career as a theater owner and has gone down in Pasadena history as a cinema renegade.

Even in the Golden Age, adult theaters were hated by many. Parent associations and religious groups alike spearheaded grassroots protests that eventually led to the zoning laws that helped bring down the era of the adult theater. In 1973, the Crown Theater in Pasadena, CA, began screening Deep Throat from noon until midnight daily in a bid to capitalize on the adult-themed trend.

This decision upset a group called Christians of Pasadena, and they began picketing in front of the theater in 1974. When politicized demonstrations did not work, the group held a silent prayer vigil outside the entry, which didn’t stop the theater from showing the film, but certainly made it awkward for patrons.

Southern California Had Its Own Chain Of Pussycat Theaters

Southern California was the birthplace of the adult theater industry. One of the originals, the Pussycat Theater, grew so popular that it became a franchise. At its peak, the Pussycat Theaters had around 50 locations that served as a spot for locals as well as tourist attractions. Their returning patrons and selection of films served as an effective business model, and the chain thrived for the entirety of porn’s Golden Age.

In the 1960s, the average American family started to have access to television sets in their homes for the first time. This led to a sharp decline in general movie theater attendance, which had been strong during the years following WWII. In order to coax movie-goers out of their homes, many theaters began offering perks like air conditioning and more comfortable seats.

For theater owners who couldn’t afford these amenities, the best way to turn a profit was to start showing a genre of film that would keep patrons coming back again and again: lewd content.

Local censorship helped do in the American adult theater industry as well. In the case of Miller v. California, the ruling reduced the Federal government’s role in determining what was obscene. The obscenity laws that had been an impediment to the rise of the Golden Age were obliterated by this judgment, but the new law of the land was, ironically, more damaging.

Now, the power to determine what qualified as obscene rested in the hands of local governments, and adult theaters faced a heightened backlash from small conservative communities across the country.

There Was No Place For Adult Theaters In Reagan’s America

The cultural conservatism of the 1980s was a backlash to the sexual revolution of the ’60s and ’70s. Ronald Reagan’s presidency emphasized a return to family values and a crackdown on all things considered seedy. Adult theaters had a home in the gritty streets of the disco age, but in the era of shopping malls and the War on Drugs, adult theaters turned into an easy target for moral crusades.