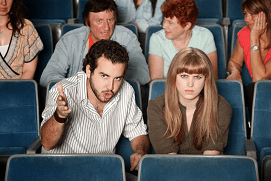 Look, I’m sure that many of you are doing your best to be cordial and respectful of the fact that there are other people in the theater with you. However, others (and you know who you are) act as if the entire theater is their backyard. After one too many whisper-fights with a self-centered narcissist who tried their best to blind me while texting throughout the movie, I decided that now is the perfect time to write about the unspoken movie theater rules.

Social distancing made going to the movies a real adventure. It takes planning, preparation, and it comes with not-so-insignificant risks. Nowadays, we have a hard time spending time with friends and family, let alone going in public with them. So when I go to the movies, I want to have an absolute blast.

Of course, even before social distancing, I wanted moviegoing to be an experience. We all have multiple streaming services at home, so when we choose to get dressed and go outside, we expect to have a good time. Except some people are apparently hell-bent on ruining that for many of us.

Movie Theater Etiquette That Everyone Should Know About

There really aren’t that many cinema rules. What’s more, many of them are pure common sense. For example, you’re supposed to arrive on time (which means before the movie starts) and sit in your designated seat. If you’ve sat in someone’s place, move seats. You know — just general common courtesy. You’d think everyone and their mother is fully aware of each and every one of them.

However, it seems that movie theater etiquette still eludes plenty of people who lack what I like to call movie manners.

Yes, your baby is adorable. Sure, it’s the cutest baby I’ve ever seen. I’m sure it’s also smart and super well-behaved.

But do you know what your baby isn’t? It’s not mine! So why do I have to suffer?

Look, I fully realize that parents of young kids have it rough. The children occupy so much of your time you barely have a moment for yourself to take a breather. I get it.

I also know that it’s perfectly reasonable that wherever you go, your baby goes with you. However, that’s not always appropriate. For example, if you have a young child, you can’t take them to the theater with you because:

So unless your child is old enough to sit still and watch a movie without getting the running commentary from you, don’t bring them to the theater!

RELATED: Should You Bring Your Baby To The Cinema?

#2: If the Message Is so Important, They’ll Call

When you go into the movie theater, turn off your phone. That’s it; that’s the rule. Don’t put it on vibrate and subtly check on it throughout the movie. You only think you’re subtle. We ALL notice it. That’s especially true if your phone is on full brightness. I’m pretty sure the actors in the movie would notice it.

If you’re expecting an important message, maybe don’t go to see a movie, how about that?

Look, I get it; sometimes we can’t put our lives on hold just because we’re waiting on some big news. So if your phone rings during a movie, it’s not the end of the world. Sure, you’ll inconvenience other people, but only if you decide to do the stupidest thing ever and actually answer the phone while you’re still inside.

Sure, your phone call is important, but only to you. The rest of us don’t care and would like to see the movie without interruptions. Take your call outside.

RELATED: Should You Be Allowed To Use Phone In The Cinema?

If you’ve already seen the movie, don’t giggle in anticipation before the big twist. Also, don’t announce it! Just because you’ve seen it and already know what’s coming doesn’t mean the rest of us want the surprise ruined.

If you must talk during the movie (which, believe me, I don’t understand), keep your volume down.

Given how expensive moviegoing is, I don’t actually see why teenagers (and some adults) still use it as their go-to makeout date idea. If you’re planning on spending the majority of the movie sucking face with your significant other, save some money and do it at home!

We get it; you love each other so much, you can barely keep your hands to yourself. However, PDA is a huge no-no in the movie theater.

If you really must share kisses and whatnot with your SO in the theater, pick a seat in the back. That way, the rest of us won’t have to witness your kissing technique.

I always wonder about the people who put their feet on the seat in front of them. Who raised you? Would you do that at your house? Would you really raise your dirty feet onto a seat and worst of all, next to someone’s head at your mom’s house?

I’m guessing the answer is probably no. So why do it in the movie theater?

Sure, the movie theater has workers who will clean it after every show. However, that doesn’t mean we should all act as if the entire room is one big trash can. What’s more, it’s only polite to pick up after yourself.

If you’ve eaten in the theatre, make sure you clean your seat and pick up the trash as you go out. It really isn’t that hard, people!

I can usually spot troublemakers in the concessions line. They are loud, throw popcorn at each other, and slurp drinks from their soda cups. If you’ve recognized yourself in my previous statement, consider re-reading my movie theater rules. If you do, and you change your behavior accordingly, I’ll personally save a seat for you next time!

Any cookies that may not be particularly necessary for the website to function and is used specifically to collect user personal data via analytics, ads, other embedded contents are termed as non-necessary cookies. It is mandatory to procure user consent prior to running these cookies on your website.